Pieter Cornelius Mondriaan, later known as Piet Mondrian, was born in the Netherlands in 1872 and died in  Feb 1944. Mondrian was a painter and theoretician.

Mondrian is known as a pioneer of abstract art. He started off painting realistic scenes and his favorite subject to paint was trees.

Mondrian slowly developed his painting style by focussing on the vertical and horizontal lines within trees and eventually his work was stripped of all referenceable signs of identifiable subjects.

He collaborated with another painter Theo van Doesburg in 1917 and they formed an art style known as De Stijl, which means style in Dutch. This art form initially started as a publication where Mondrian wrote extensively about his work and ideals. De Stijl became a phenomena and was not restricted to art only, it pertained to architecture,painting, fashion etc, much like art decor of the 1930 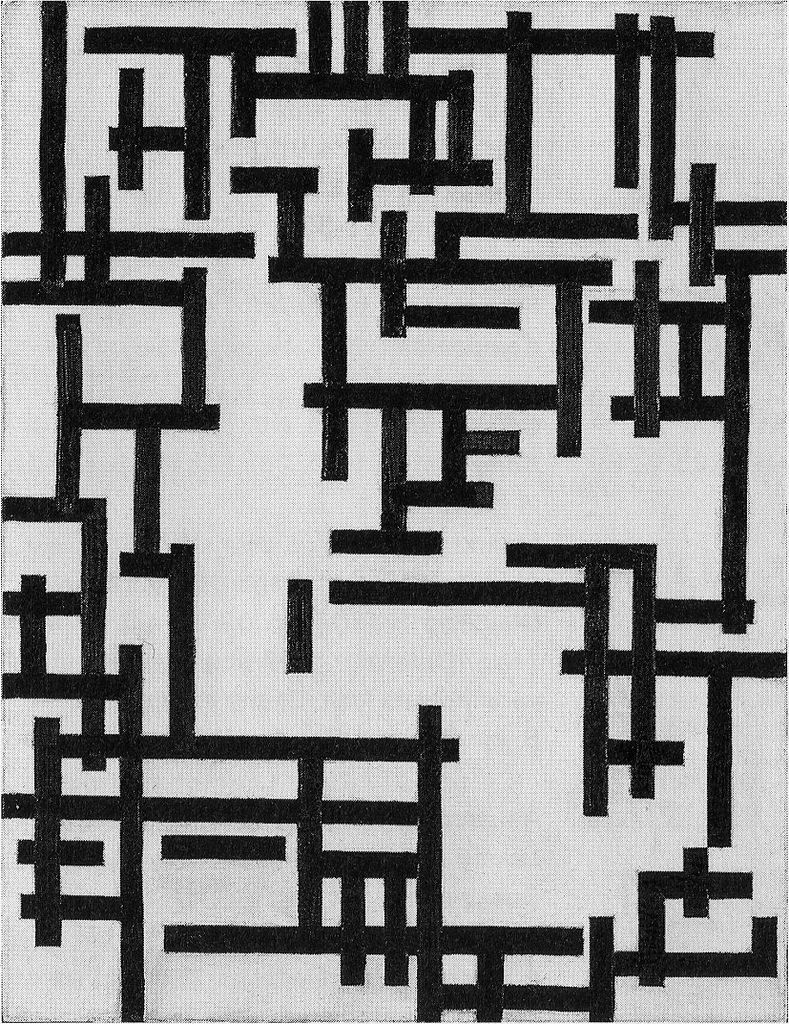 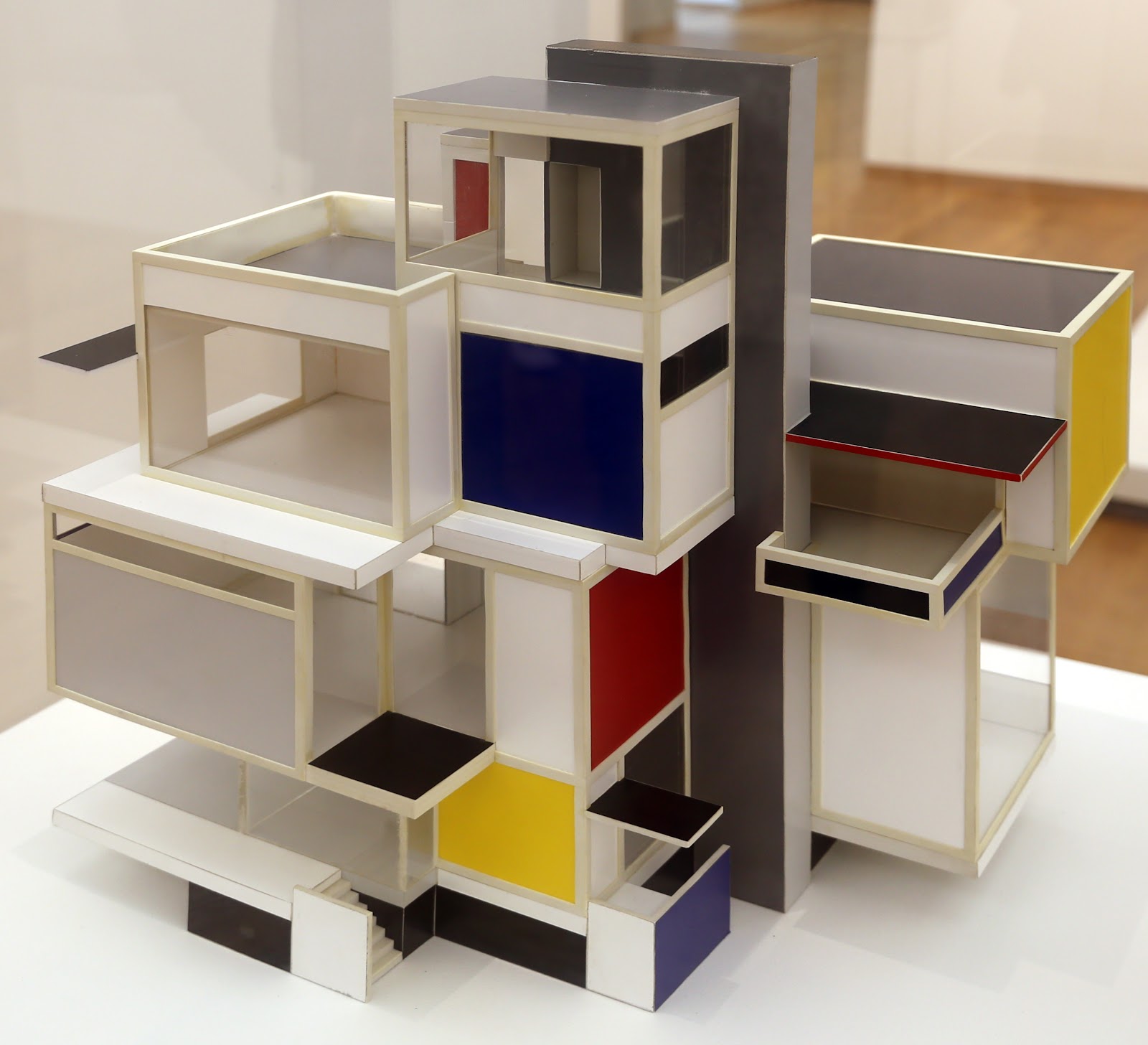 example of architecture by Van Doesburg

This new art form De Stijl was also known as Neo Plasticism. The basic elements were colour, line and form in its purest state.

They only used primary and non-colour, squares, rectangles only horizontal, vertical and

The influence of De Stijl  movement on the formation of the Bauhaus movement is well written about.

His paintings can be classed in three separate stages,

Representational in his early years 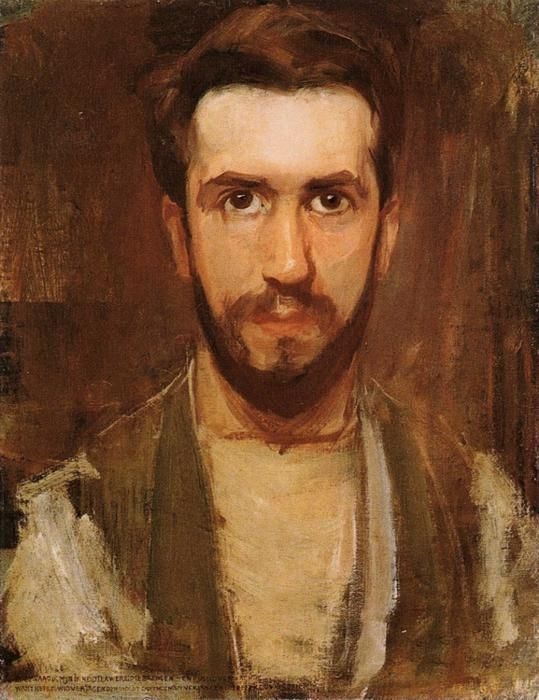 Limited colour  palette, and background is treated with big loose brush strokes but works well in contrast to the lighter colours on his subject in foreground. 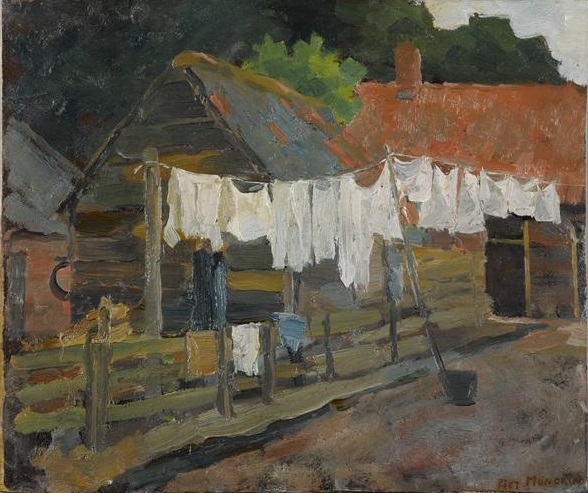 In these works I’m struck by the broad and  looseness of his brushstrokes. His colour palette is predominantly dark and seems sad and forlorn in a way. It has an impressionistic appearance. The treatment of the trees in the background suggests a vast forest to be explored but also very eerie as it seems thick and dark. 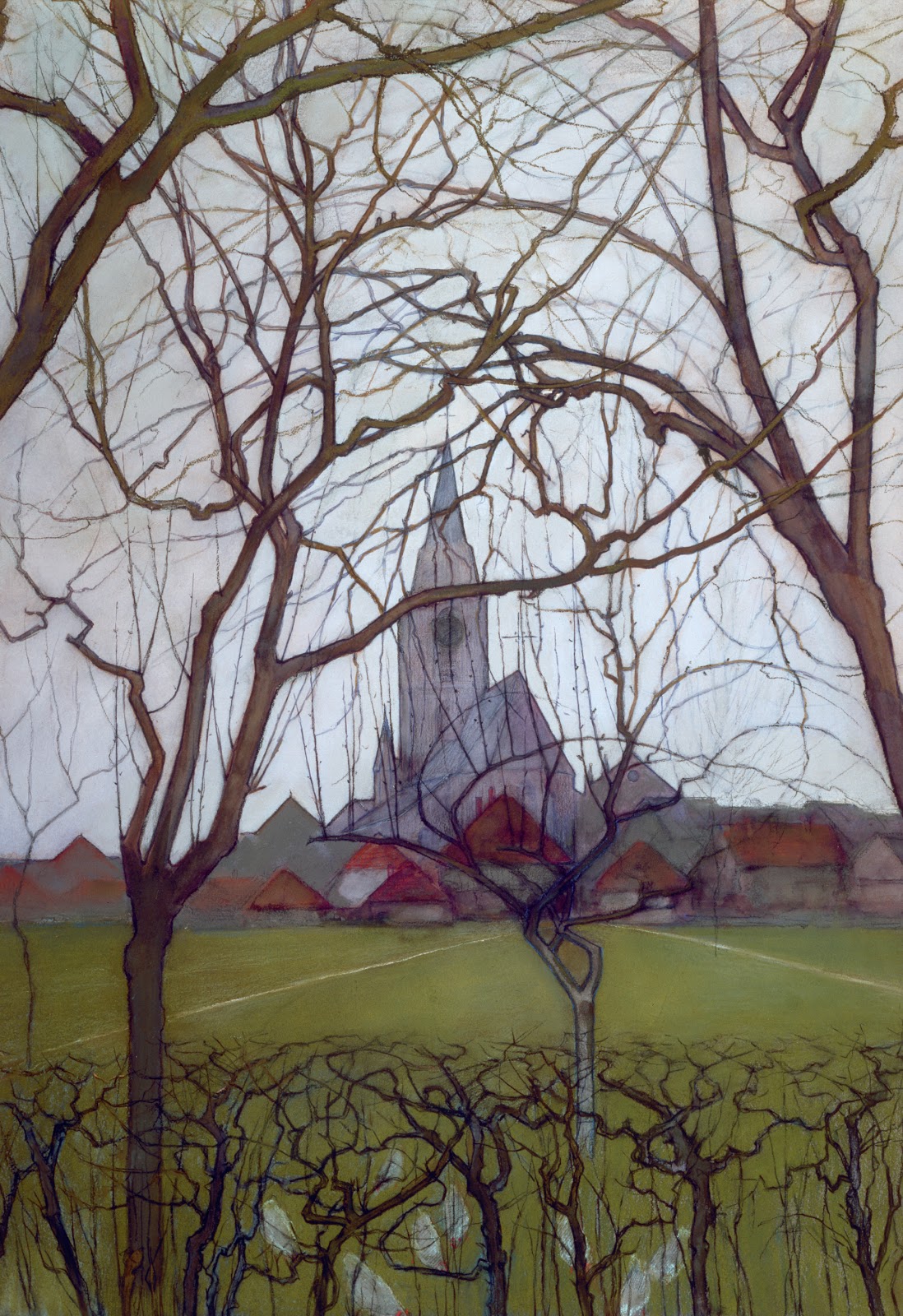 Here we can see a distinct change in his work. All though he still uses all the formal representations in some of his work there are definite elements of abstraction appearing. He uses more form and stark black lines to define shape as seen in these examples of his work: 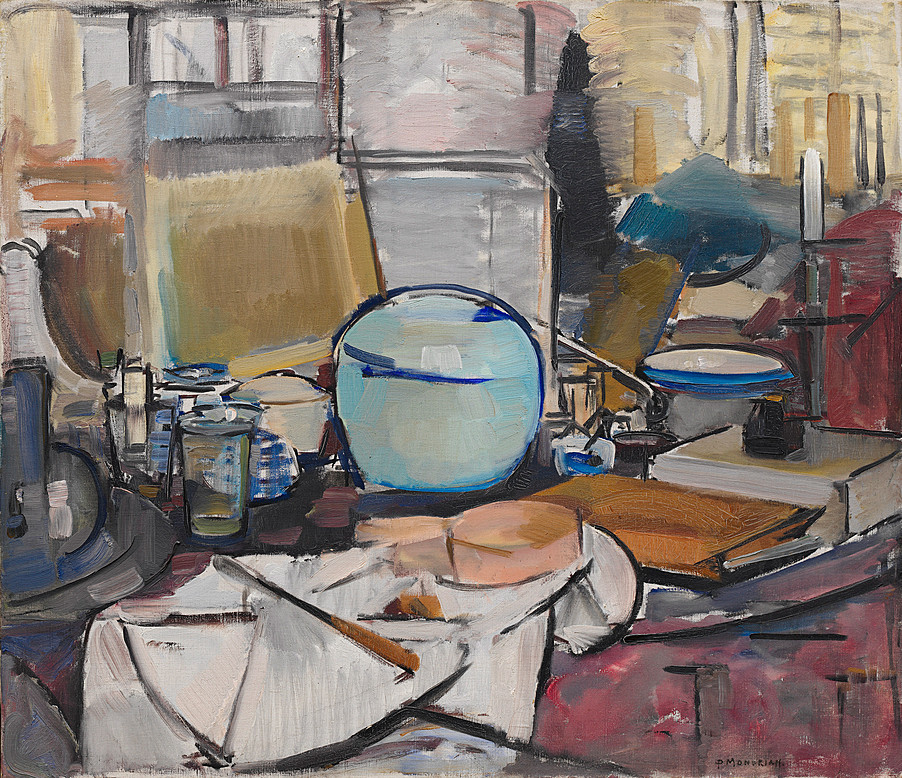 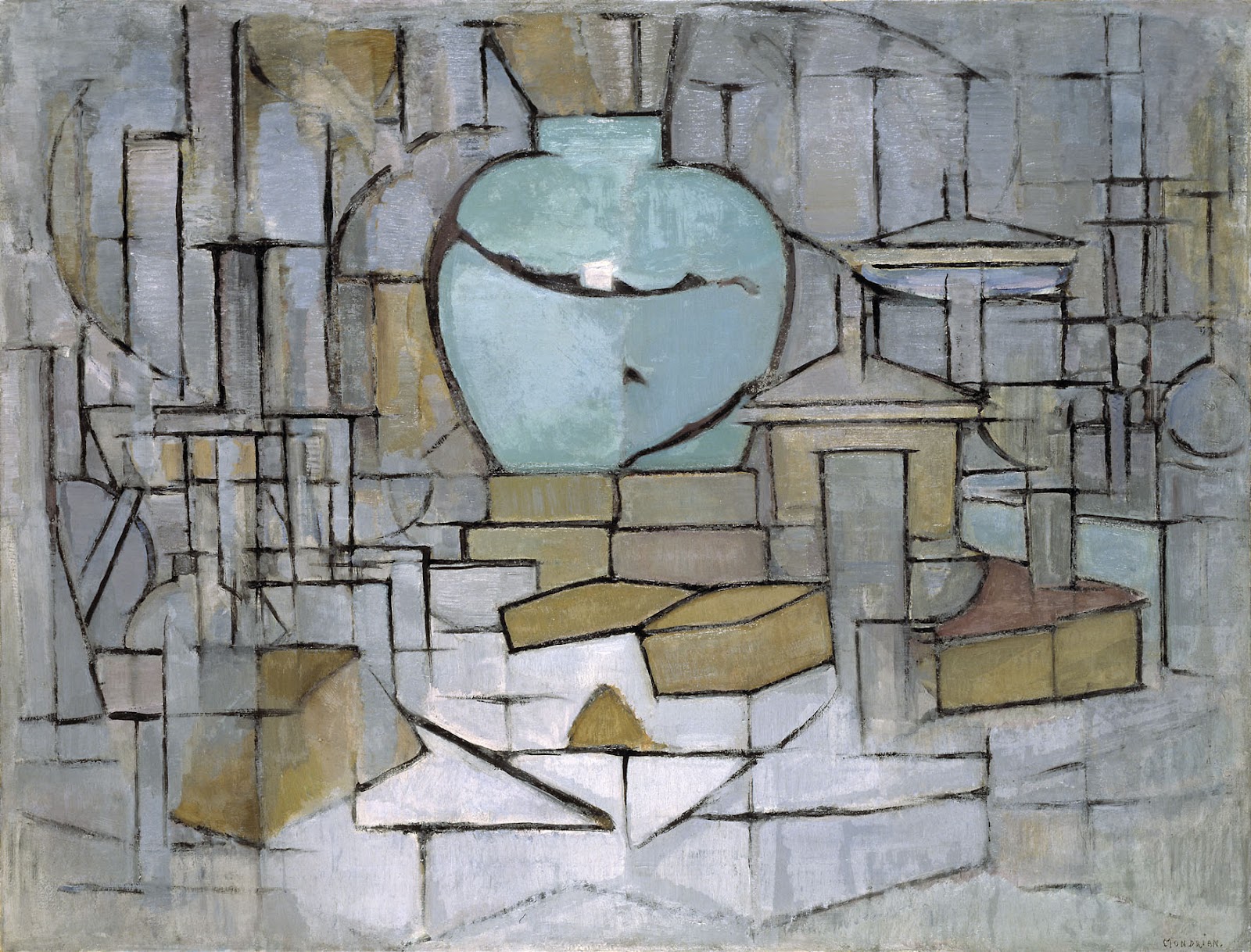 In these examples it’s clear to see how he erases the reference points and is becoming more gestural in the second composition, whereby objects are replaced by lines within a limited colour palette. 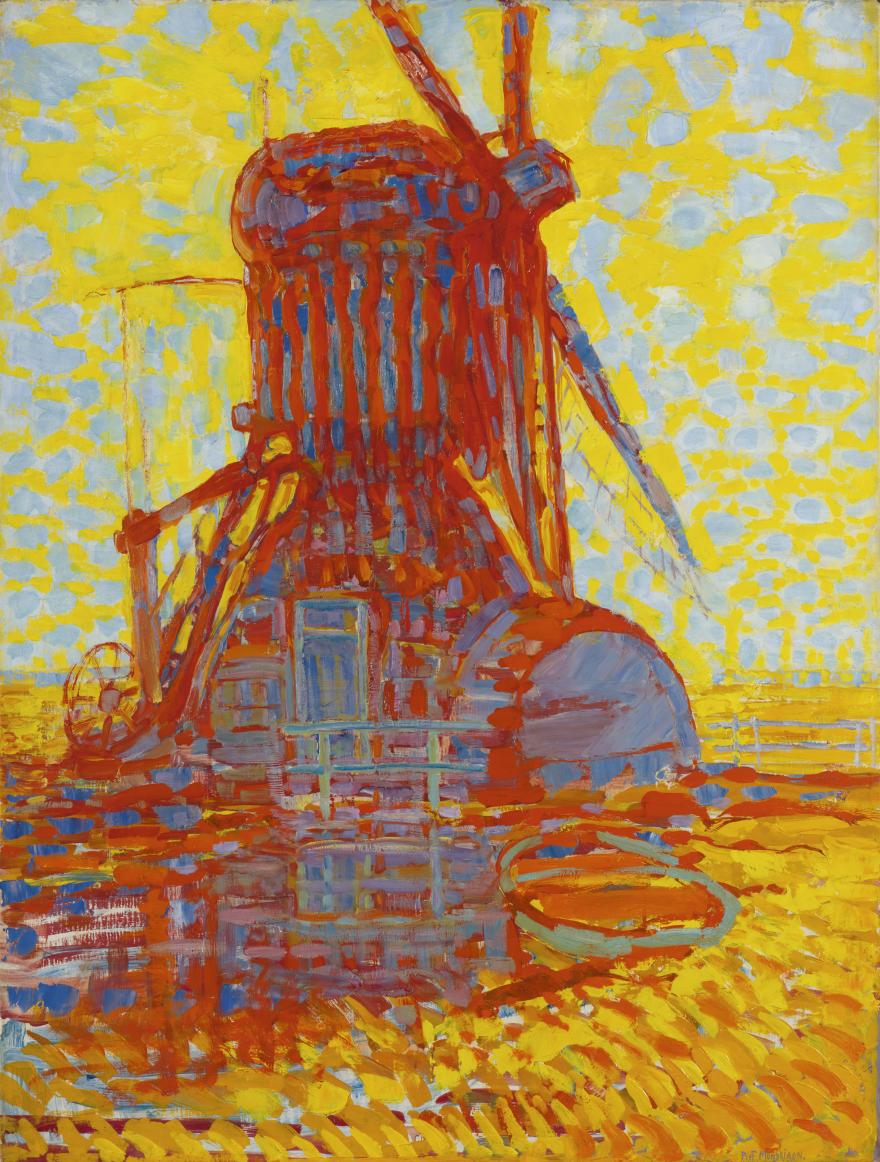 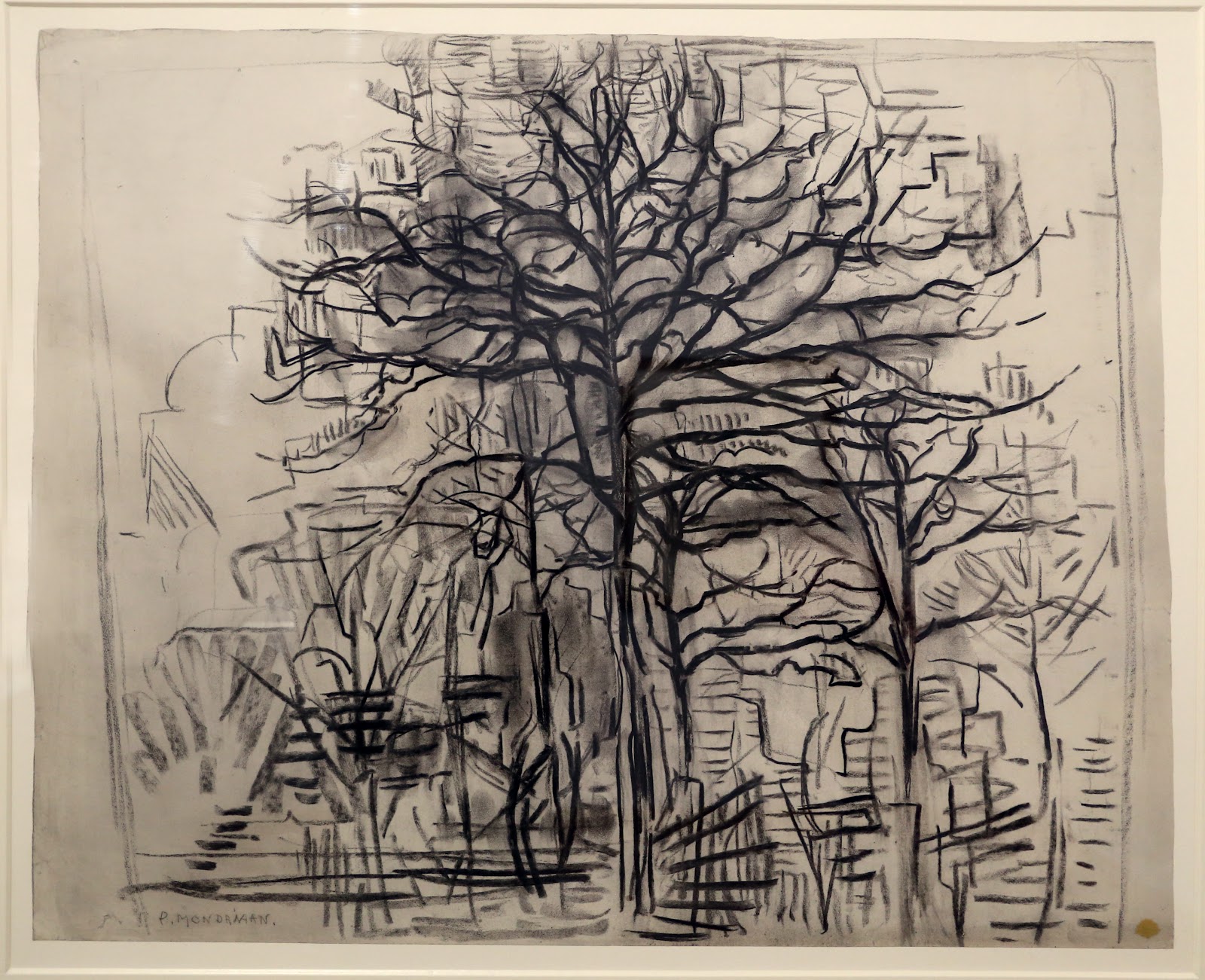 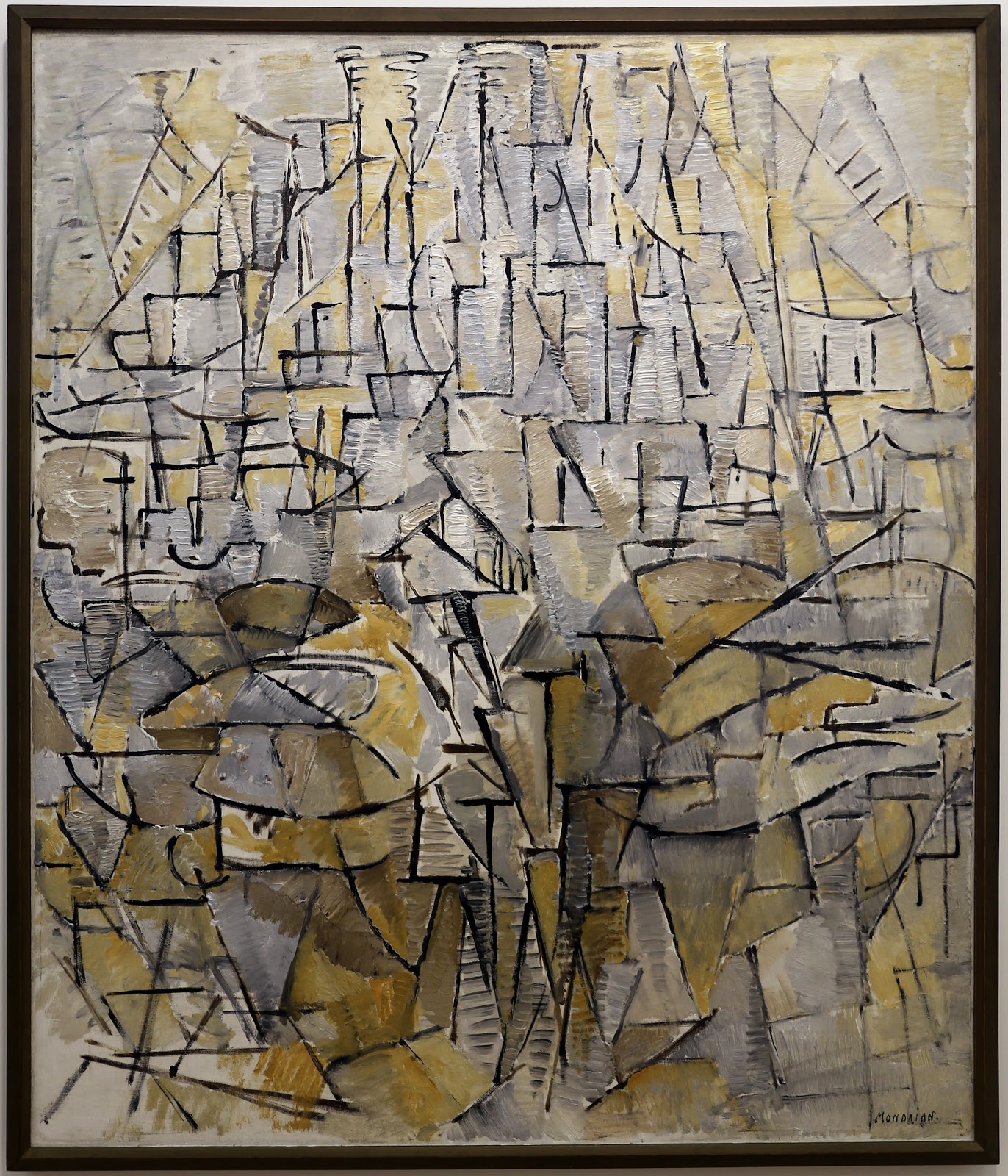 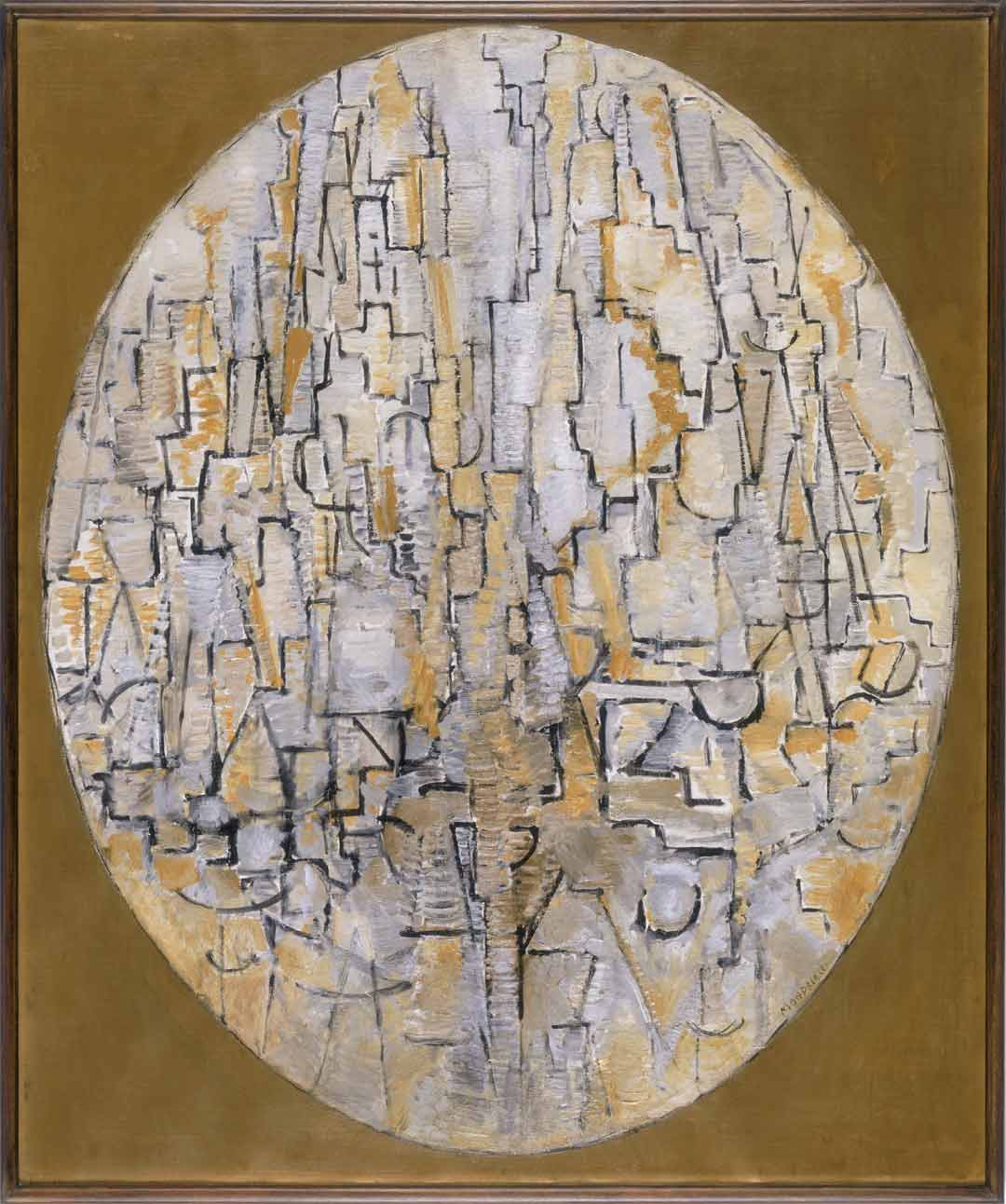 here it’s clear he is experimenting with colour and lines. The composition is made up from lines and the colour  provides tone and structure to create contrast and shadow and light.

Mondrian had a tendency to paint figuratively every now and then as if to silence naysayers or to prove to himself that he can still do it. The best example of this is still life; White rose in glass, 1921. Whether it was a commission or something he wanted to paint, this is slab bang in the middle of the era when most of his work was abstract, which was a very new thing at the time. 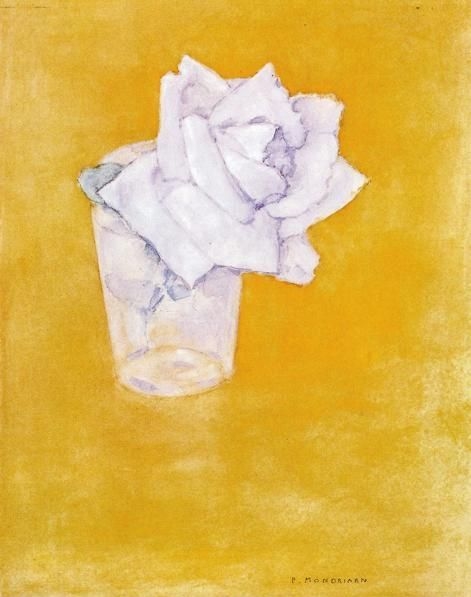 This is an exquisite example of his draughtsmanship. With the use of mainly yellow and white he is able to narrate a story of life and vitality in a glass.

The following examples are his best known works in which he works in pure abstraction.with no obvious references to life but forms the essence of life. 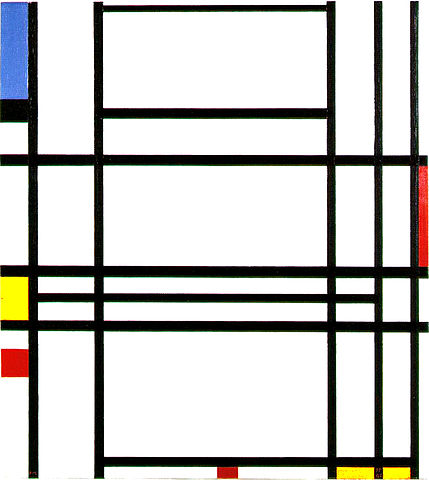 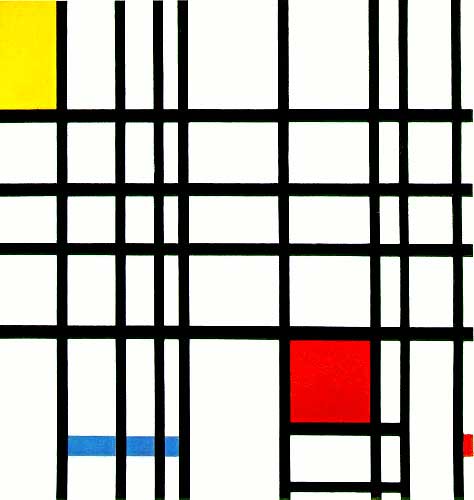 composition with red yellow and blue 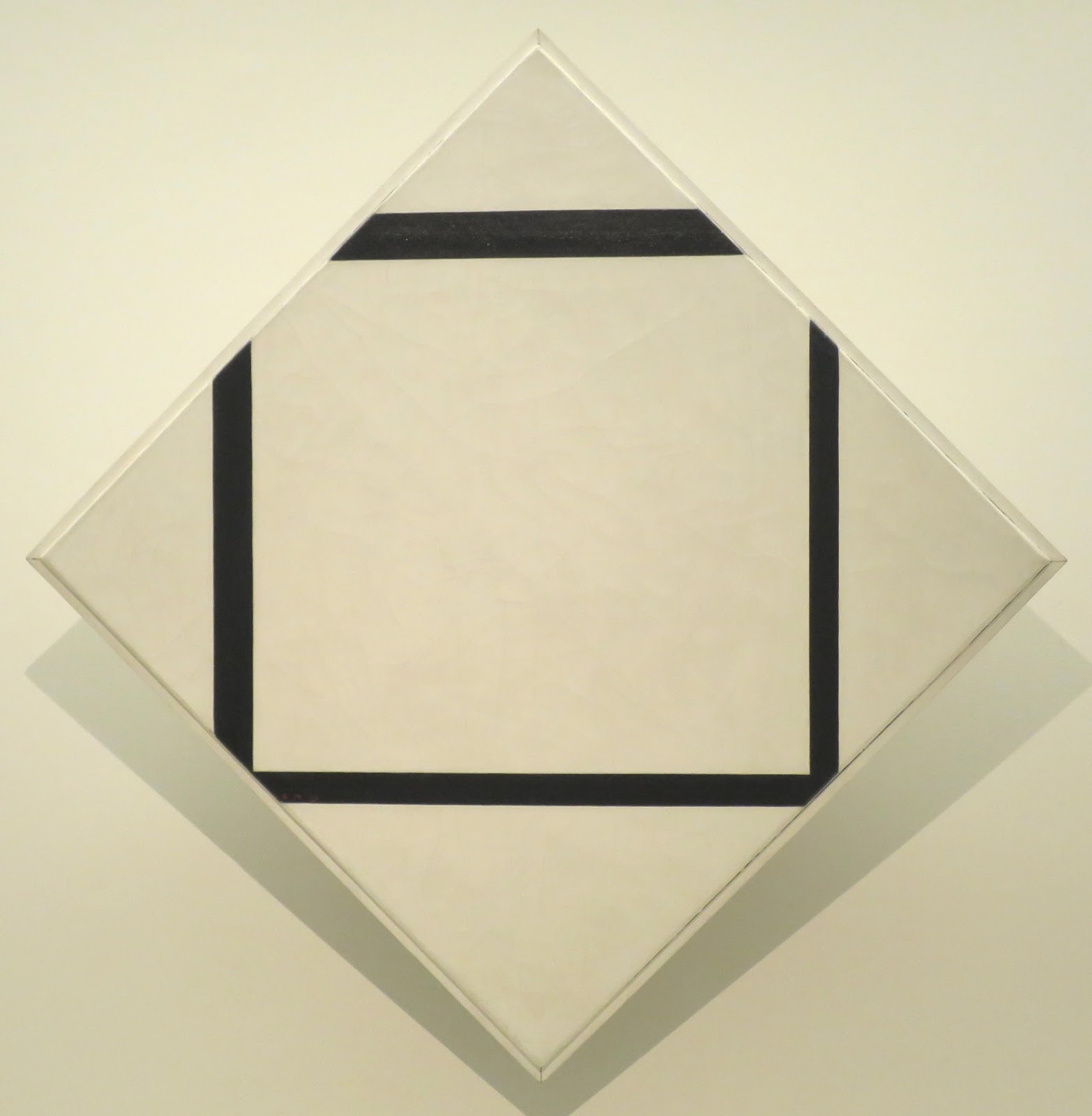 1930 Composition no I; Lozenge with four lines 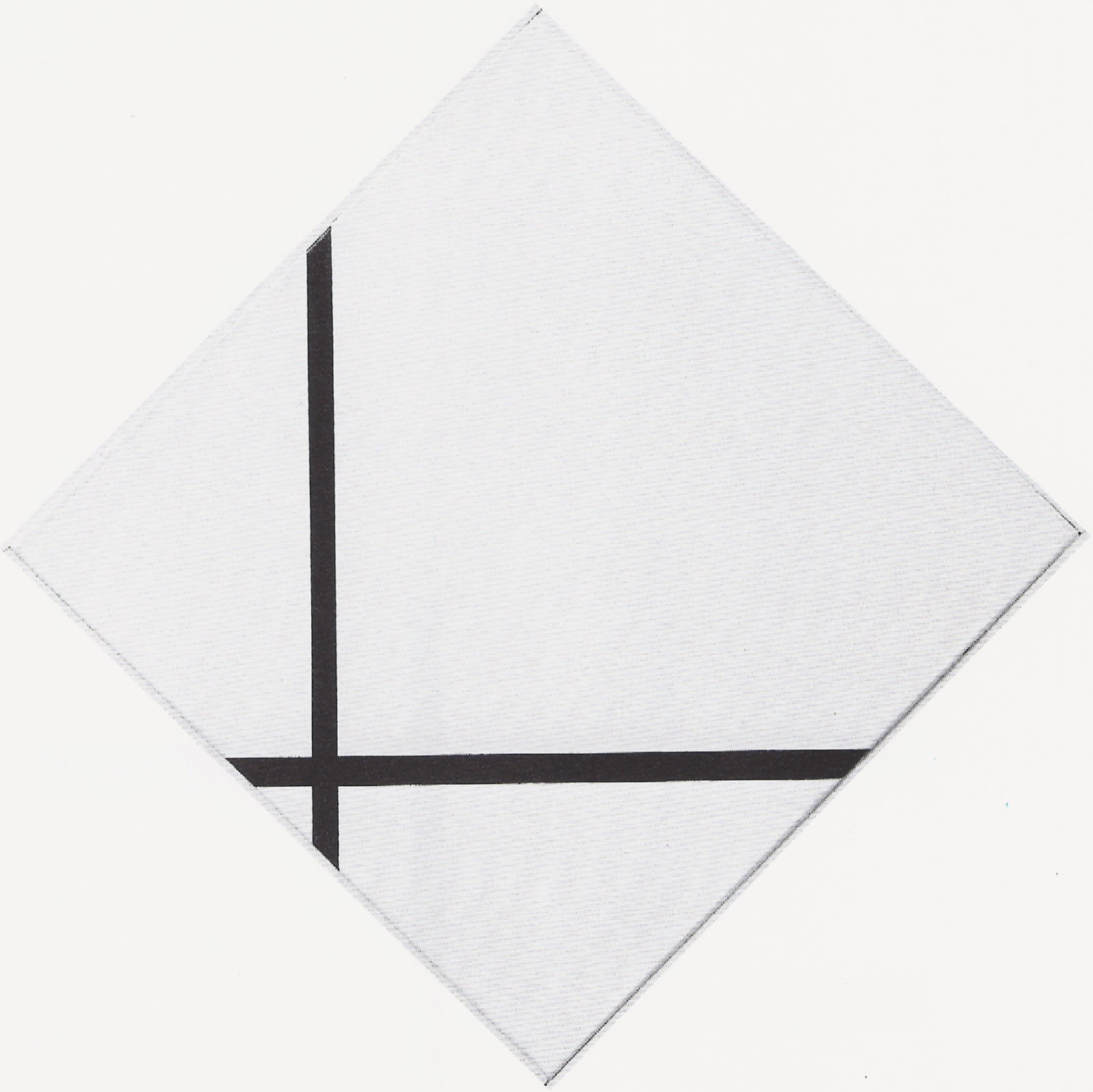 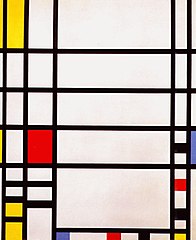 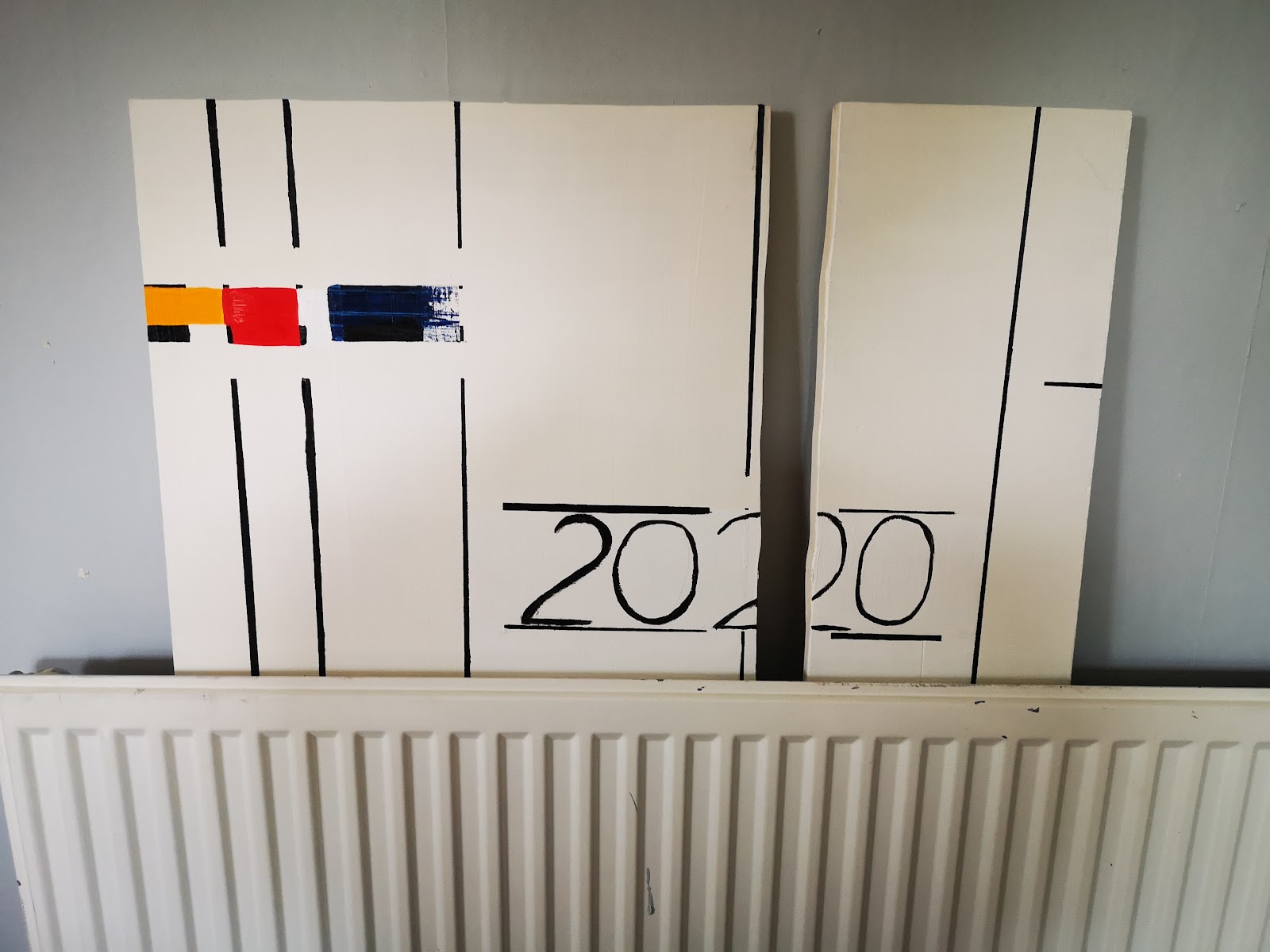 The premise of this work is about having to experience an intensely emotional and uncertain period of time. It’s about having lived an emotional rollercoaster and as if 5 months was 10 years of problems. A feeling that the time you have was not enough so you needed to borrow more time and space, hence on subject matter on two canvases. It’s about mapping out the first 3 months  but the rest of the canvas is empty just much like what lockdown felt. 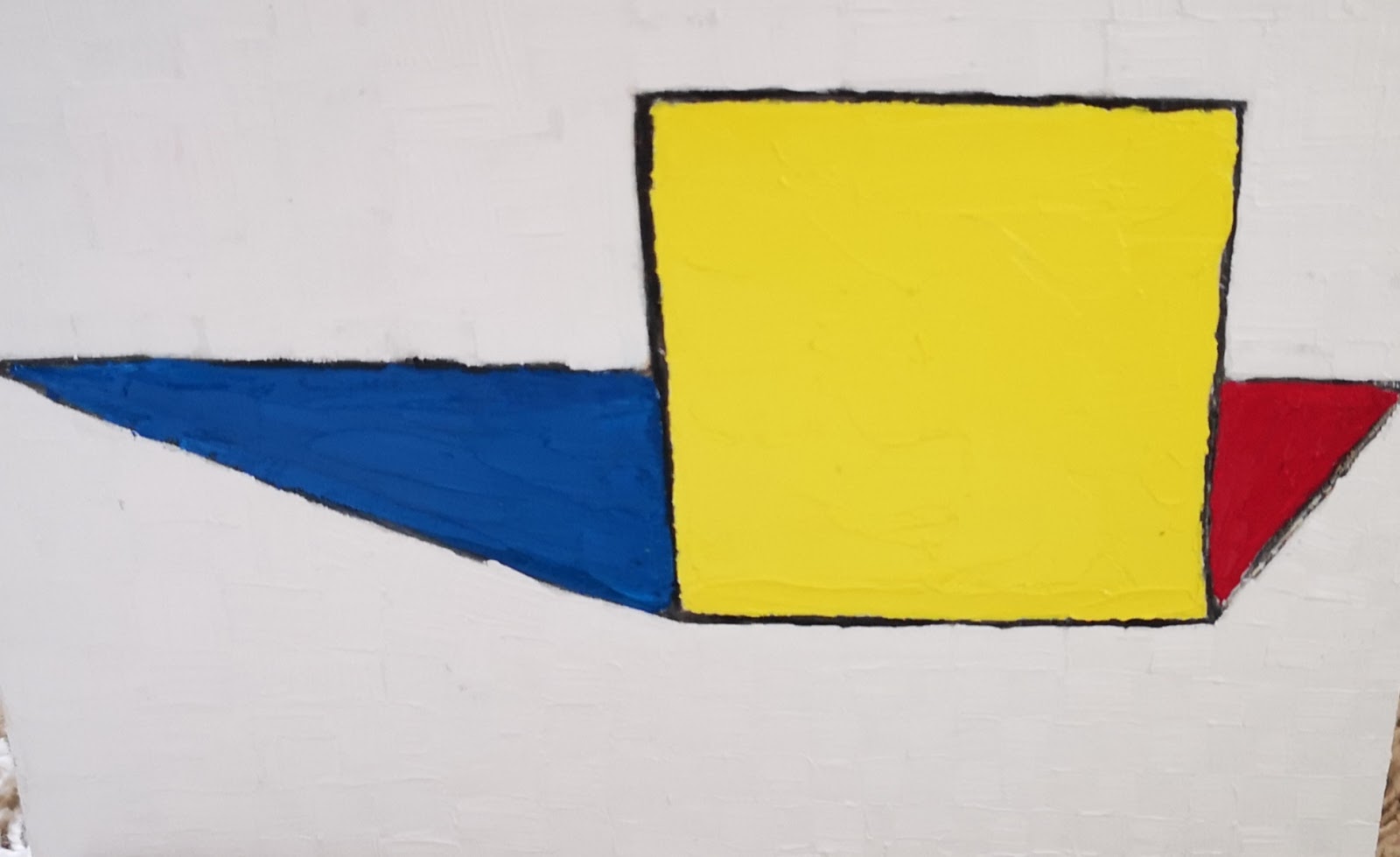 oil painting on board